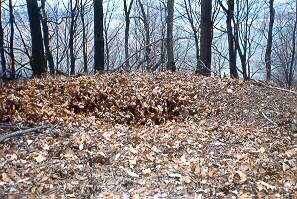 To "LOG ON" not so many years ago meant just that. Your sending station was a high place visible to another high place. The sender would lay "logs on" a fire laid in a confined and controlled place. Proximity to a major traffic route for observation and communication was essential -- T-Mail (trail, get it :-)   )Prearranged signals spelled out the messages.

One would expect to see stone signal towers along the coast of Greece, Turkey and other Mediterranean sites of antiquity, as we have done; but finding evidence of the World Wide Web of the Ancient (and not so ancient) Native Americans in Ohio is quite another thing. The Olde Forester led a group of SCOPSmembers (South Central Ohio Preservation Society) to a ridge top in the Scioto Valley of Ohio on Sunday, February 2, 1997, to see a cluster of three apparent SMOKE SIGNAL BOWLS on the top of Weddington Hill south of Richmondale, Ohio.

We haven't found any anthropological reports on signal stations of the Native Americans, but do not doubt that some study has been made of their communication systems. William E. Myer's "Indian Trails of the Southeast" (USA), Bureau of Ethnology, 42nd Annual Report, 1928, Smithsonian Reports, and Paul A.W.Wallace's Indian Paths of Pennsylvania, 1965, are two excellent studies. The Pennsylvania Historical and Museum Commission mention evidence of Native Americans leaving messages along the ancient footpaths in various forms: cairns of stones, painted posts, broken branches, petroglyphs,etc. (Get out that Boy Scout manual).

Sending messages would have been important to the Native Americans in both peace and war. The few pits we have found in the Scioto Valley on prominent hill tops have a common appearance and could have been used for signaling with smoke and fire. Further research might prove this.

When one finds a saucer shaped depression, either square or round and about ten feet across, lined on the perimeter with field stones, you wonder what was there. The few I have found have been on ridge tops or down from the top, but in a spot from which you can see another hill top. Next, you ask yourself, "Was this a house or shanty site?" Not likely, with no water or place for yard or other conveniences.

What would determine the shape of a fire signaling site--the diameter and depth? You had to have enough RAM of fire to make it visible over the miles to the next station. You also had to be able to control the fire from running away on a windy ridge. You had to be able to turn it off and on--bytes of fire or smoke. Eight to ten feet diameter would be far better than only a couple of feet. The stone wall around the pit would, not only confine the fire, but be props for poles laid across the pit on which a cover of skins or blankets could be positioned and manipulated.

Chances are that there are remains of dozens of signaling stations on the prominent peaks or elevated ridges along the Scioto River corridor. This was stated to be the most important ancient route between the Lake Erie area and the Gulf of Mexico. Writers refer to the route as "The Warriors' Path" or "Path of the Armed Warriors." In Ohio it was called "The Scioto Trail". The footpath went up both sides of the Scioto River. Wallace reports seven Shawnee villages along the Scioto during the Seventeenth Century. Lower Shawnee Town was first at the mouth of the Scioto at its confluence with the Ohio River; then, pressure from the English pushed them to the Pickaway Plains south of Circleville.

The three apparent signal bowls on Weddington Hill are as close to the Warriors' Path on the east bank as you could get. The face of the hill is very steep and the flood plain comes close to the hill. There is an easy ascent to the top, which is why I explored the hilltop in the first place. A reported SALT Road, The Pancake Trail, was supposed to have crossed the Scioto bottoms from Higby and gone eastward on a ridge to the Salt Licks where Jackson is now located.

What fun it would be to find all the signal bowls from Portsmouth to Circleville, Ohio, and to LOG ON!

THE VIEW FROM THE THREE SIGNAL BOWLS ON WEDDINGTON HILL

The Scioto River makes three big loops south of Richmondale and picks up Big Salt Creek on the third loop about a mile south of the highway.

The loops, plainly visible on the topographic map, mark the exact location of the robbery of the north-running preglacial Teays River by the new south-running valley we call the Scioto River. The Teays flowed northward through present Richmondale to Vigo and Londonderry leaving its borders plainly designating good farm land from hill woodlands. The SIGNAL BOWLS on the Weddington Ridge bluff look down on this geological conflict of continental proportions. Imagine being there when the present Ohio River Valley broke through it's icy dam to drain Lake Tight at our feet.

One can reflect about the period when melting glacial surges scoured the sides of the valley with blocks of ice, gravel, and debris in glacial "milk water."

From a half mile south of Whisky Run the Scioto scoured against the very steep bluffs which rise for 500 feet above the Scioto floor and peak at 1,064 ft. above sea level just south of Hickson Run. Weddington Ridge climbs from 600 ft. to 940 facing the valley. The ascent to the three Signal Bowls begins about 1.5 miles south of the Pike/Ross Co. line one mile south of Mutton Hollow. After passing Mutton Hollow Rd, you proceed past the next small hollow, unnamed but noted by the road crooking into the hollow then proceeding southwest along the base of the steep front of the ridge.

The next small hollow from the east is where you stop to ascend the ridge. There was a house there, shown on the 1961 topo maps, but now gone--just rubble to mark the spot. You can park in the house site drive, but we parked my car on the opposite side of the road on the east edge of the railroad r/w (not a crossing as the turnoff butts against the ballast of the tracks).

The ascent to the high ridge lookout at this location appears to be the easiest or lowest gradient of any to the six bluffs south of Richmondale which would give a view northwest up the Scioto Valley into the Harness farm area where the Harness Earthworks are located.

Some of these hilltops on the east side of the valley might possibly have signal bowls or lookouts on them, inasmuch as they would give a different perspective. We haven't checked them. They would not provide a view of Rattlesnake Knob nor the signal bowl found in Springfield Twonship north of Brown Hollow Road.

It is an easy walk up the razorback slope toward Weddington Ridge. The first 1000 feet is easy to an elongated bench about 100 ft. long at the 700 ft.level. Then the going gets a little harder. The site has a similarity to the ramp constructed by the Romans to ascend the Masada. We don't think the Hopewell people built it, though.

The Waverly sandstone layers outcrop in the first 100 ft. You pick your way through the blocks of fine-grained sandstone. This band is typical of what I found all through Pike State Forest when I cruised the land about 1949. The Waverly stone resists disintegration from weathering and makes a stony band along the contour outcropping.

We had two false alarms along the first 1000 ft. We concluded that these pits were exploratory digs into the Waverly sandstone. The pits were irregular-not round saucer-shaped.

The footing is not difficult. Part of the way there was a deer trail, and we observed a fresh scrape area--early for this rutting season, it seems.

Major landslides or creeps had occurred on the east side of the ascending ridge facing south from the ridge top. They cover an acre or two and appear to be about 8 ft. displacement in a circular margin. Two slip areas were observed, one just below the other. They appear to be older than the pole-sized trees growing on them--which are vertical, not tipped as on fresh slips.

Kezia Sproat (coordinator of SCOPS) and I concluded that this is not the location of the Pancake Trail reported to run from the Salt Licks, Jackson, to Highby and up the south side of the Scioto.

The path up the point is not cut into the ridge as on a used road or ancient footpath. The path changes from side to side without continuity. It is not indented and not obvious.

Near the upper portion there are gullies, not continuous. These appear to be the type which develop from dragging logs down a slope.

We did find the three probable signal bowls visited earlier by The Olde Forester. The highest one is on the extreme west edge of the high ridge bordering a very steep slope facing the valley. It is bordered with

blocks of stone and depressed in the center.

The two others are along the ridge descending to the southwest at about 100 ft. elevation intervals. They are similar in appearance.

We took color print pictures in each of the sites.

The leaves were still on the dense woods making it almost impossible to see any distance. On February 3 we could look directly into the Harness Earthworks Site described by Squire & Davis in Ancient Monuments of the Mississippi Valley.

Return to the Olde Forester