TRAIL SIGNAL TREES are extremely important historically. Native Americans made them by bending a sapling and holding it by some means until the first curve was fixed by growth. Apical dominance (a forester's term) or natural trend to grow upright would straighten the upper part. They probably tied it some way to hasten the fixation.

I have seen only one SIGNAL TREE.  That was at LYNX PRAIREE in Adams County, Ohio. We were at the dedication of the Lynx Prairee Nature Preserve named in honor of a famous woman botanist from Cincinnati. Lucy Braun ( I believe). She had published her extensive research findings on Lynx Prairee. Along the trail leading from the road into the tract a large white oak (I believe) was pointed out as A SIGNAL TREE.

I just received an E-mail (12/3/98) from Tom O'Grady, a friend and amateur historian like myself. His specialty is the canal systems of Ohio, but he just informed me that he thinks he made an important discovery of a signal tree on Weddington Hill which is south of Richmondale, Ohio.

The following is Tom's E-mail:

I made a trek over to the Scioto valley a few weeks back with a few friends and we used your directions from your web site to locate the smoke signal bowl. 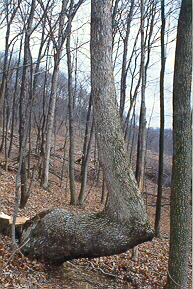 On the way up the razor back ridge we took a short rest and found ourselves standing next to what appeared to resemble a signal tree.  It looked like all descriptions I've ever read about Indian signal trees.  It was a white oak with a diameter at waist height of about two feet.  At that point it took a 90 degree turn to the right as we were facing it and was parallel to the ground for a few feet and then it took another 90 degree turn and went straight up.

Just after noticing the tree I looked up along the ridge in the direction we were heading and it became very apparent that I was looking at an old trail. It was very well defined because the wind had blown the fallen leaves and filled the trailway.  As one stepped into the trail it was obvious that it was a very old, well beaten path snaking its way to the ridge top.  It led us right top the signal bowl as you described.  From that point we could see up the Scioto Valley toward Mount Logan, down the Scioto Valley toward Omega, and off to the northeast along the old Teays Valley.

Needless to say we were all very impressed and inspired to do more exploring.  Unfortunately a large clear cutting operation was occurring while we were there.  They have cut trees right up to the trailside. Some of the down trees fell or were bulldozed across the Warrior's Path.  One of the two lower signal bowls had a newly felled tree lying across it.

I believe the trail and the site have great historic value and would make a fine park.  Other than a few periodic hunters and yourself, the area seems rarely visited; a stark contrast to the time when so many travelers established such a well beaten thoroughfare.

I'm interested in finding out more about the Warrior's Path, more about signal bowls in the Scioto Valley and the possibility of same in the Hockhocking Valley.

Thanks a million for the guiding light.

The location is a most appropriate place for a Signal Tree. The occurrence of Three Signal Bowls at different elevations on Weddington Hill is one reason to mark the trail. Another reason would be to confirm what may have been An Ancient Trail To the Salt Springs. Someplace through here "The Pancake Trail" passed. (That is a given name.)

From the top of Weddington Hill, at the upper Signal Bowl, a ridge runs directly toward the Salt Licks for a long way passing Allen's Chapel. It continues on an easy route I have followed to Jackson.

Return to The Olde Forester