An Oasis of Flowers

By The Olde Forester, Emmett A. Conway, Sr. 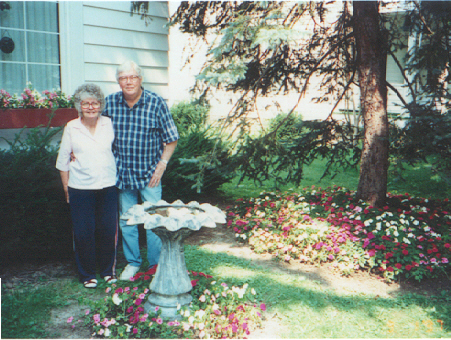 My loving wife of 60 yrs minus three months, Myrt, made the old wreck of a house into a veritable oasis of flowers- with the help of Sandy in picking out the perennials, Carol in adding to the plot, Emmett, Jr. in picking out hanging baskets each  year, Richard who made a fancy birdhouse for the front porch which had a chickadee nesting there, and the help of the other children---and, I want to tell you,  Lisa DeChano, a friend and student of OU and Western Texas State, who dropped in one day and pitched in to help plant the impatiens one year--maybe the ones in the photo. Lisa has just received her PhD in Geography this year. I helped her with her Masters in her study of state parks in Ohio. She is one of my proteges of whom I am very proud.

Myrt was most particular when someone was planting the impations for her. She would not only place each color, but make you turn them to the outside. I kept telling her that the sun would turn them, but she couldn't wait for that. 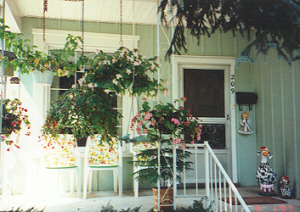 The hanging baskets were usually given by Emmett, Jr. Once a house finch nested in one and another time a chickadee nested in the little birdhouse made by Richard from tounge depressors. The porch was filled with winter birds and when the snow weighted down the blue spruce, it made a landing place for cardinals, evening grosbeaks(Carol thought they were large goldfinch once), siskins, etc.

The perennial garden was planted in 1996 when we returned from Susan Morrissey's and Bruce Mackle's wedding. Sandy and Mom picked out an assortment in Hartsdale. Then I spaded and spaded and spaded to get them all in.

It is very seldom that someone buys a unique home with flowers et al who has the same continuity of habits. It is a great satisfaction to have learned that the granddaughter of Charlie Goslin, whom I knew an admired as a naturalist and historian, mainly in the Lancaster area, had purchased our home in McArthur. Debbie's father appeared at our door here at Traditions one day last fall and said he wanted to meet me, in that his daughter, Debbie, had purchased our home. His name rang a bell and I said, "Charlie Goslin, I knew." He said, "That was my father". He gave a copy of one of Charles' book on, "Crossroads and Fence Corners" to me. I use it as a reference to answer questions I receive. It truly is a small world for,  "People work together when they work from the heart. Whether they work together or apart", Robert Frost in "A Tuft of Flowers". 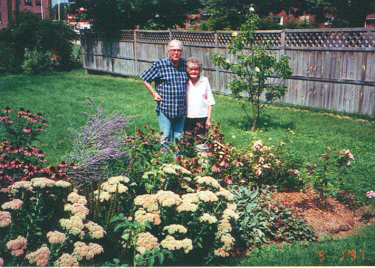 Now Debbie Goslin has expanded the beds and her father built a pool from the row of sandstones. It is on the south end. She plans to have a deck which will overlook the flowers, martin house, Franklinia shrub-in bloom in one photo and a gift of my brother Errett. Debbie plans to paint the shack which I  had hauled from the lumber yard when Frampton closed it down. Debbie says that the chimney swifts have returned inmasse to the high school.

Return to the Olde Forester