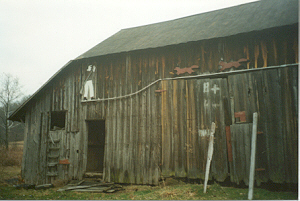 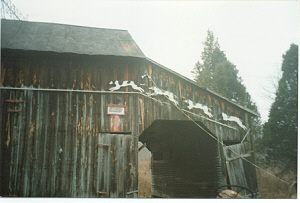 In September, 2000, The Olde Forester and his bride of 60 years led his daughter and son-in-law to try to get a view of the Barn Painting Scene which has graced the side of the barn facing the street since approximately 1861. It was dark, the bushes had expanded into the drive from the road to the barn and our driver was hesitant about giving it a try. With a little urging, we drove in close enough to see the four white and black running fox hounds and the farmer standing erect with his gun. The foxes were lost in the shadows.

My file, dated November 26, 1975, and printed in the Vinton County Courier, is worth repeating. It is pure Nineteenth Century Rural Folk Art.

The article was part of a Smithsonian Institution traveling exhibit a few years ago held in the Herbert Westcoat Memorial Library, McArthur, Ohio.

Sad to say the tenants who are occupying the premises for the past few years have allowed it to be cluttered and messy. No plans seem afoot to preserve the homestead including the house, out buildings and the family grave yard nearby on a low ridge.

The story was written by Emmett A. Conway, Sr. and included in it marvelous and loving description of the late Nina Cox of Costa Mesa, California. Her letter is quoted verbatim. The article was published at the time when reprint had been made of the "Atlas of Vinton County, Ohio," initially printed in 1876 by Titus and Simmons.

Reprint of the
The Slagle Fox and Hounds Barn
By Emmett A. Conway, Sr. and Nina L. Fox
(Originally published in the Vinton County Courier, November 26, 1975)

The Pennsylvania Dutch have their geometric HEX MARKS on their barns to make the crops grow good and plentiful. Vinton County has a century-old HEX MARK on a barn in Pretty Run to emphasize another product of farming in Vinton County Hills  FOX HUNTING  Appalachian Style.

Harold and Marie Seitz have lived on the Slagle Home Place in Section 24, Eagle Township on County Road 17 since about 1946. Travelers up and down Pretty Run  one of the most beautiful drives in Vinton County  have marveled at the fox hunting scene on the barn, so realistic and characteristic of Vinton county night life.

The large, well built barn has never had a coat of paint  wood lasts longer that way  but the animals and Mr. Slagle are painted in natural colors and being maintained in good shape by Harold.

We knew the scene was old, because William Conway, the writer's father told us once that the characters were on the barn about 1885 when he used to help his father, Jeremiah Conway with his grocery store and huckster route out of Jimtown on State Route 327.

In 1974 we asked Harold Seitz what he knew about the history of the Fox and Hounds Barn and he said that he had an aunt in California who could give us the history of the place. In a couple of weeks, Harold handed us a letter from Mrs. Nina L. Fox (no relation to the one on the barn but just as smart and clever and very artistic. We saw some of her handicraft work at Lawrence and Rosalie Seitzs home)

Nina L. Fox lives in Cosa Mesa, California and is the granddaughter of Mr. Slagle who built the house and barn and other buildings where Harold Seitz lives. Her mother was Nannie Slagle and she married John W Allison. She was born nearby the home place 78 years ago and does have authentic memories of the Slagle farmstead and the ability to describe them  as we shall see below.

One will soon realize that her letter is not just about the Fox and Hounds Barn, but farm life in Vinton County 100 years ago. It is a sentimental folk story of love, work and pleasure.

The buildings which Gpa Slagle built with his own hands are still there to be seen from the road. The L-shaped house with the bell cupola on top, the mild house and the smoke house just a cozy step from the back door. The fruit and vegetable storage house nearby with its one-foot thick walls filled with sawdust, and the family cemetery on a knoll a couple of hundred yards behind the house.

Mrs. Nina Foxs letter puts it all together for us:

It is always good to hear you are well and happy. God sure is good to us!

I will tell you the things I'm positive about and I sure am interested and would like to see the finished article about our dear beloved Slagle Home.

Gpa Slagle built the house for his bride, Amy Minerva Turner. He made each cupboard door & did all the carpenter work including 3 corner cupboards  table and many cabinet in the kitchen.

The meat house & porches he hewed out of rocks on the hillside where he bought the rocks or slabs from and used in the meathouse & milk house. He filled the walls with sawdust and one sees a very artistic and good carpenter work all about the place.

The land was a land grant signed by the President. He got several acres.

When he died, my mother got the home place; her Brother, Herschel, got his equal share; her Brother Williams children got an equal value & he left some to Floyd Slagle, his grandson who had got his leg hurt in the mill.

My grandfather, Thomas, had built a large remarkable mill where wheat was made into flour and other foods milled. He built it & operated it for years. 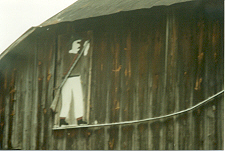 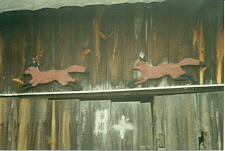 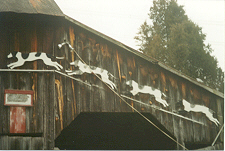 About the FOX & HOUNDS on the barn, it was done by placing muslin sheets on the wall and my Grandfather & his dogs reflecting shadows on the wall with Grandma tracing around the shadows. The fireplace burning light gave them a good shadow. He cut out the wood pictures that way of his self and his dogs and he drew the fox from life.

After my grandfather died, my Mother and Father moved back to her birthplace and they lived there until my Mothers death on October 16, 1923. Then my father continued to live in the home place until his death on December 9, 1945. Some of the family got the land deeds. I will try to locate them for you, but Im not sure I can get them.

I know the FOX & HOUNDS have to be from right after or near the date of my Mothers birth  that was March 11, 1861. My grandfather was a great hunter and loved the Fox Hunts.

My grandfather and grandmother lived there from their marriage until their death. Gma died of cancer and Gpa. Died suddenly on a Sunday morning and Doctor said from indigestion. That was the year, I believe, of 1915 or early in 1916.

My grandfather purchased and installed the dinner bell on the cupola over the kitchen. They had taps like dinner call, sickness, company or many things, so as Gpa worked in the field, the bell meant many messages.

He also was a lover of bees and kept many hives all the time.

They had a family Cemetery also on a knoll on the farm not far from the home place.

Also, I think one of my very sweetest memories is that before breakfast, they read from the Bible and had morning worship. Also it was an evening time of worship. We used to gather around the organ and sing hymns.

At one time my Grandfather erected a building not large, but where church and Sunday School was held and revival meetings; so Harold, you can see why Im so happy you live there.

The house was dedicated to God and I love each memory as it speaks of our special forefathers who worshipped God and lived the good clean life.

Anything else, please write me and I hope I can have a copy of the article that's wrote. I am happy since Im not living there, I would like to have been, but whenever estate is settled, sometimes one goes along with other wishes of family; but Im trying to say, Im glad youre in that dear home. I love you so.

Love and God bless you, Nina."

Return to The Olde Forester